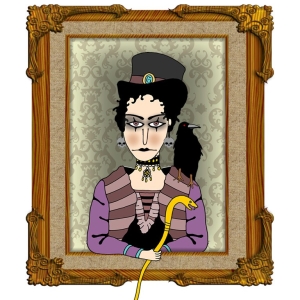 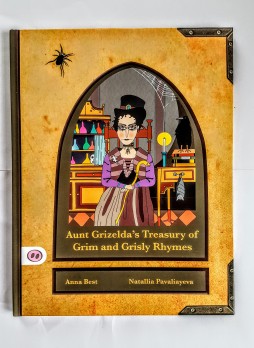 comes the Woebegone Blog of Aunt Grizelda, a sarcophagus of delights for those of a Gothic disposition.

Drawing on my experience as children’s writer, book reviewer in The Sunday Tombs Culture supplement, and life style commentator in Haunted Homes, I’ll be bringing you:

It was particularly satisfying to have a poem from the previous book, Treasury of Grim and Grisly Rhymes, beautifully recited by a bright little girl called Ella.

The new book is available through online book stores, including Amazon. Why not see if a re-working of your favourite fairy tale is in it?

I’m delighted to announce the arrival of Fairy Tales of the Unexpected!

Excited for the launch at the Book Corner, Halifax Piece Hall, 7pm on Thursday

It’s rare a novel comes along that leaves you gasping with admiration at the exquisiteness of its prose and tenderness of its humour, but Leonard and Hungry Paul is one such.

Telling the tale of two unremarkable friends with unexceptional lives it celebrates the joys of the ordinary with a freshness and wit that enchants.

If you’re feeling cynical and world weary, this book is a tonic.

I’m delighted to announce the second book in the Aunt Grizelda series will be launched on the 4th July at Book Corner, the wonderful independent book shop in Halifax’s historic Piece Hall. The event is free and starts at 7pm.

I’ll be reading extracts, signing copies and giving an account of the road to publication with some dos, don’ts, and things I wish I’d known – tips that should help other aspiring children’s authors on their own journey.

If you’re local to Halifax, do come along.

This week’s problem comes from Ireland and concerns the extent of a spectre’s job responsibilities.

I feel as if my employers are not paying me fairly for my work. I drive passengers by carriage throughout Ireland: but as I travel through the countryside, I am also expected to call out the names of those about to die. Surely this is the job of a herald?

Another gripe I have concerns the passengers: like myself they have detached heads. On a bumpy lane this can result in them arriving at their destination with a different head from the one they started out with. It is always me that has to sort out the confusion, and I am not paid extra for this.

I am thinking of asking my employers for an increase in salary to reflect these additional responsibilities. Do you think I have a case?

Since the dawn of time dullahans have announced the names of those about to die, and therefore, even if it isn’t written into your employment contract, it is an integral part of the job. Consequently, you have no hope of extra pay for doing it.

With regard to reassigning passengers’ heads at the end of a trip, you are on firmer ground. Before the explosion of public liability claims, passengers cheerfully accepted a bumpy ride could result in a new look. However, these days, they can turn quite nasty about it. But is it your responsibility to sort out? It rather depends what it says under the Job Responsibilities section of your employment contract.

P.s. Should any of your passengers actually assault you, you may have a claim against your employers under insufficient Health and Safety provision.

And oft will leap a forest fence

In front of someone’s speeding car –

And that, alas, is au revoir.

I’m delighted to announce the second book in the Aunt Grizelda series is now printed. Here’s a sneak preview of one of the illustrations (by Natallia Pavaliayeva) and an extract.

Once upon a time there was

Whose wicked sisters made her sleep

On straw down in the cellar.

They played games on their smart phones

While they made her cook and clean,

And called her lots of horrid names –

Good gracious, they were mean!

What is your favourite fairy tale? Let me know, and if it’s in the collection, I’ll print an extract.

Gum – bubble or chewing – can lead to dramatic accidents. The following recounts what happened to one young boy…

Bobby blew a bubble out of bubble gum one day,

And it was such a giant one it carried him away.

He sailed above the rooftops like a helium balloon.

His mother cried, “Come back at once, it’s time for dinner soon.”

But sadly, Bobby could not heed this order from his mum,

Because his lips were stuck fast to the bright pink bubble gum.

The neighbours rushed into the street and pointed in dismay,

As Bobby shrank into a dot and drifted far away.

And further yet and further, up up into the blue,

He drifted to such dizzy heights he vanished clear from view.

For weeks they sent up spaceships – on board were rescue men,

But Bobby and his bubble gum were never seen again.

So if you must chew bubble gum, be careful or you may

Come to a very sticky end as Bobby did that day.

Do not chew dramatically in public: you are not the manager of a professional football team. And even if you are, don’t do it.

Do not chew at ANY sad or tragic or important event: it looks as if you don’t care, and even if that’s the case, some of the people attending the sad/tragic/important event do care and won’t thank you.

Dispose of your gum carefully: your sister’s hair is not a suitable place and neither is beneath your desk or bed. Bin it.

Manners makyth man was the motto of William Wykeham, a man who lived in the 14th century, and although that period isn’t a shining example of civilized behaviour, what with its beheadings, floggings, dungeons, brawls and general brutishness, his motto drew attention to a politer way to live.

Although people’s behaviour continued to be violent, it was at least accompanied by please and thank you, due to William. The aristocracy in particular began to abide by rules of etiquette and would often present a wonderfully formal banquet to the king, before stabbing him to death. And instead of a prisoner being told, “Get yer head on that block,” a much pleasanter, “If you could just lay your head down on that block, please,” made proceedings much more courteous.

By Victorian times genteel behaviour had got out of hand: people required an encyclopaedic knowledge of cutlery items and how to use them, not to mention knowing when and where certain garments should be worn and how often they should be changed. The slightest deviation from the social code could spell disaster. Decorum was everything. I include, below, an excerpt from the poem, “The Lady Languishes,” as an illustration.

The Lady Languishes (an excerpt)

While others trip the polka gay

She grips her throat in anguish,

And calls a footman to prepare

A couch on which to languish.

The party strikes a merry note,

The host is gaily feted,

While she in desperation seeks

Oil that is camphorated.

Her breathing rattles so!

Alas, she has no handkerchief

On which her nose to blow.

And out her dainty nostril drips

A liquid pale as water –

Her heart beats fast and so she grasps

Something she didn’t oughta.

The fine white tablecloth she takes,

And bows her head down close…

And thinking no one sees the sin,

She quickly wipes her nose.

Those of you familiar with the poem will know she is spotted committing the faux pas and is exiled from polite society for the rest of her days.

Today, thankfully, manners have moved on, and polite society is less burdened with dos and don’ts, but it is still useful to know a few basics to ensure smooth social interactions. And this is why my next series of articles will be a guide to modern etiquette.

Wild animals are called wild for a reason – approach them at your peril. Alas, Jim thought he knew better.

While wandering in the woods one day,

Against a tree it scratched its back,

And looked too sleepy to attack –

BEWARE THE BEARS – DO NOT GO NEAR!

But reckless Jim did not think twice,

And heedless of that good advice,

Set out towards the grizzly bear,

Regardless of the danger there.

The details of what next befell

Are far too grim for me to tell,

But yes, the bear enjoyed a snack –

And foolish Jim did not come back.

My Tweets
Follow The Woebegone Words of Aunt Grizelda on WordPress.com